Linsly Looks to Improve to 7-0 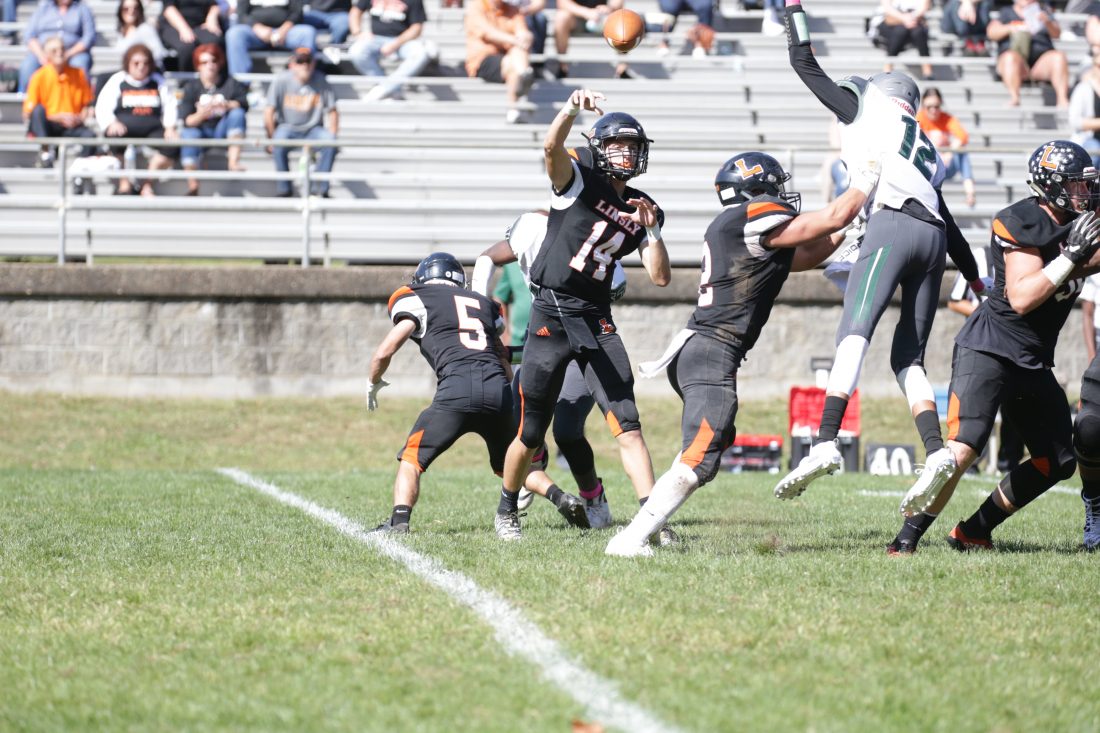 Photo by Alex Kozlowski Hunter Kelley (14) and Linsly look to improve their record to 7-0 as the Cadets travel to Point Pleasant on Friday.

POINT PLEASANT — While there are still four games remaining on the schedule for Linsly, the 2019 football season is turning into something very special for Coach B.J. Depew’s Cadets.

Friday they will fire up the buses for the long trip south to Point Pleasant for a first meeting with the Big Blacks at Ohio Valley Bank Track and Field.

Linsly (6-0) is coming off a 49-27 win over Allderdice last Saturday afternoon. To get a feel for how good of a season it has been, the 22-point victory was labeled by Depew as “not one of our best games of the year.”

“It really wasn’t our best game,” Depew said. “We made our share of mistakes and it just turned into a game that we had a tough time getting into any rhythm. Allderdice made us play the whole four quarters.”

For Coach David Darst, his Point Pleasant team is sitting at 1-2 on the season and had its home-opener last week in a 49-14 setback to Bluefield. The Big Blacks had only nine games scheduled this season and have already had their bye week along with having a game canceled earlier this year.

“This is a quality football team and the score of last week’s game against a very good Bluefield team in not indicative of them,” Depew said. “We had a couple of coaches make the trip down there last week and they were very impressed with the team, the facility and the environment as a whole.

“We knew when we put them on the schedule this was going to be a tough week and we still expect that. The coaches have been sending messages to the kids that this is a big game and we cannot look past this one.”

Hunter Bush is the Point Pleasant quarterback and completed 10 of 14 passes for 75 yards last week including three for 31 yards to Nick LePort. Logan Southall, who had a 45-yard interception return for a touchdown, is also a capable receiver along with Zander Watson.

Brady Atkins had 85 yards on 21 carries and a touchdown for the Big Blacks against the Beavers.

“We are really still getting to know them from our film exchange,” Depew said. “They have only played those three games and it’s been a little tough getting a feel for them.

“Actually, we started talking to them last year when we were both looking for games but couldn’t make that happen. But we continued pounding the pavement and for now we have a one-year deal with them.

“I know that they really like to run the football but also have the ability to throw it. From what I have seen they kind of have some of the same tendencies as Martins Ferry and Morgantown and also have the same type of quality programs as those schools.

“It looks like they are a team that is going to play as hard as everyone else we play.”

The Cadets are led by junior quarterback Hunter Kelley who has completed 41 of 71 passes for 624 yards and seven touchdowns while throwing his first interception last weekend. Kelley threw a 74-yard touchdown pass to Trevin Tush on Linsly’s first offensive play of the afternoon.

Tush, who leads a fine receiving corps, finished with four grabs for 104 yards with the score. For the season Tush has 19 catches for 328 yards and two touchdowns. Lee Paull also had a touchdown grab in the contest.

Carl Nyh is the Cadets’ leading rushing with 534 yards on 61 tries with six trips to the end zone while junior Steven Felton had a coming-out party with nine carries for 98 yards and three touchdowns against Allderdice.

“It has always been our goal to get as many people involved as possible,” Depew said. “We do not want to depend on any one guy, even though it would be very easy to just fall back on Hunter (Kelley), but we feel we need everyone to be successful.

“It’s always nice to see blue-collar guys like Lee Paull and Steven Felton enjoy some of the spotlight. Steven does a lot of blocking and leading the way for Carl Nyh. You can’t design the team concept thing but as long as everyone knows their role and does their job it happens naturally.”

Depew knows that there are still plenty of challenges ahead and while he doesn’t like to think or talk about it, he knows where his team sits in the Ohio Valley Athletic Conference standings.

Linsly is atop the 3A standings in the OVAC, but are in a dogfight for the title with once-beaten Bellaire and undefeated Fort Frye.

“I actually had a parent send me a snapshot of the OVAC standings and I assumed we were at or close to the top, but in not playing a lot of OVAC schools I never really know what our chances are,” Depew said. “I am very proud of these kids and what they have accomplished and what is still ahead.

“The OVAC is definitely a goal that we will continue to work toward, but we still have four very tough games remaining and we will have to continue to play well to be able to compete in those games. But there is no doubt that goal is in our windshield.”

Along with Kiski and Western Reserve there is also a huge game at the end of the road that should have the eyes of the entire Ohio Valley pointed toward when the Cadets travel to Harding Stadium to battle Steubenville in the season finale.