Steubenville Lights Up the Night as Celebration Kicks Off Nutcracker Village 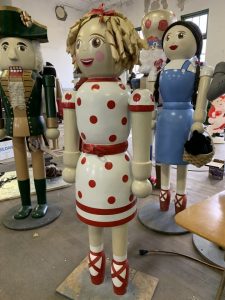 Moving day is Tuesday for the 185 life-sized nutcrackers that will inhabit Steubenville’s Nutcracker Village as well as Fourth and Market streets. The fun kicks off Tuesday with the Steubenville Lights Up the Night festivities, including the official tree lighting ceremony around 6:25 p.m.

STEUBENVILLE – If you’ve been waiting for an old-fashioned community celebration to get you in the mood for Christmas, you’re in luck: Steubenville Lights Up the Night is Tuesday, and that means there’ll be lots of food, music, shopping and fireworks in the downtown area to usher in the holiday season.

It’s also the opening of Advent Market as well as Steubenville Nutcracker Village 2019, which this year will see its population swell by 13.

The food lineup includes Steubenville Popcorn Co., Martoni Foods, Renaissance Coffee Co., Desperado Dogs and The Original Strudel Factory. House of Prayer Outreach will be passing out candy, and Wells Academy will distribute mittens and scarves beginning at 5 p.m. Steubenville’s Pride Committee also will be passing out free food and treats to kids, beginning around 5:30 p.m. at the corner of Market and Third streets across from the park. A local pastor will bless the tree and all the visitors around 5:30 p.m., with the Brenda Casey Dancers taking the stage for a special holiday production at the Berkman Amphitheater beginning at 5:45 p.m.

Around 6:20 p.m., Mayor Jerry Barilla and members of the Kloska family will lead the countdown for the lighting of the two trees — a 32-foot tree in Fort Steuben Park and a 20-foot tree in the Land Office Park by the creche — followed by a fireworks display the Kloska/Brogan family is sponsoring in memory of their parents, Bob and Terry Kloska. Bob Kloska was Franciscan University of Steubenville’s first athletic director as well as a baseball coach.

Santa and Mrs. Claus also will be on hand throughout the evening’s festivities, and visitors also will be able to stroll through Nutcracker Village — home to more than 100 hand-painted, life-sized nutcrackers. Eighty others will be on display on Market and Fourth Streets.

The nutcrackers can be viewed around-the clock. Maps with the location of each of them will be available at the Visitors Center as well as Drosselmeyer’s Nutcracker Shoppe on Fourth Street.

“This is a true community event,” Bratten said.

“Almost all the activities are free due to generous donations and sponsorships by businesses, organizations and individuals, including Trinity Health System which has made a major funding commitment. Volunteers are involved at every stage and include people of all ages. Our citizens are proud and eager to welcome visitors and share this magical event.”

Weekends at Nutcracker Village feature live entertainment organized by the Harmonium Project featuring local choirs and performers, free trolley rides providing views of historic churches and the City of Murals, and free evening hayrides. Guests also can tour the Jefferson County Historical Museum each Saturday and Sunday from 3-5 p.m. during the trolley tours.

Visitors also can get a history lesson at the First Federal Land Office, also located in the park. Docents within the 1801 log structure tell the tale of the settlement of the Ohio frontier and the westward movement.

“We’re opening the Fort this year on weekends during Nutcracker Village,” Historic Fort Steuben President Jerry Barilla said. “That’s never been done. (Weather permitting) each Friday, Saturday and Sunday the Fort will be open at a very minimal charge. We’re excited about that, we’ve had a lot of people ask.”

New this year is Gingerbread Village, opening Nov. 29 inside the Visitor Center. Dozens of gingerbread house creations entered in the inaugural competition will be on display.

* A huge model train village created by Larry Caniff will be open at 248 N. Fourth St., Fridays and Saturdays from 7-9 p.m. during Advent Market weekends.

* Children’s Lantern Parade, 7 p.m. Dec. 6. The Lantern Parade will start Drosselmeyer’s Nutcracker Shoppe and wind its way through downtown, ending at the nativity scene at the Nutcracker Village.

* The Nutcracker Drumline, a collection of percussionists from five area schools, 4 p.m. Dec. 8.

“As always, we’re anticipating a large turnout from not only the local community, but also residents of Ohio, West Virginia and Pennsylvania,” Barilla said. “Last year we had 35,000-38,000 people. The word we keep getting is people can’t wait until Nutcracker Village opens up.”

Bratten said this year, the Nutcrackers were invited to make an appearance at Christmas parades in Pittsburgh and Wheeling.