Study: 2018 Powhatan Methane Leak One of the Largest in U.S. 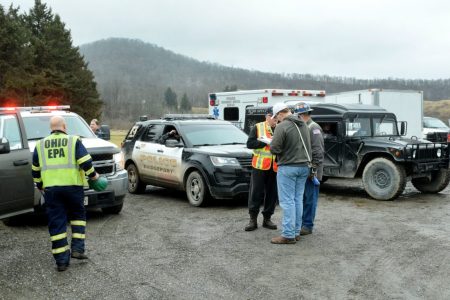 Emergency officials set up a command post along Ohio 148 next to the Clair Mar Golf Course in Powhatan in February 2018 while responding to an gas leak at XTO Energy’s Schnegg well pad near Cats Run Road.

POWHATAN POINT — A new study states that a 2018 methane leak that followed a well pad explosion near Powhatan Point may have been one of the largest in U.S. history, but the company that operates the site estimates that less than half the amount cited in the report was actually released into the atmosphere.

The report is based on data from a satellite designed to monitor the entire planet for methane leaks and emissions.

A team of American and Dutch scientists published the findings in the Proceedings of the National Academy of Sciences this week. In their report, the scientists conclude that large releases of methane, such the one that occurred at the Schnegg well pad on Cats Run Road, Powhatan Point, in February 2018, are more common than previously believed.

They say this is cause for concern because methane is a potent greenhouse gas. When burned as a fuel, methane actually is cleaner than coal, but when it is released prior to combustion, it is a more powerful warming agent than carbon dioxide, because its absorbs more energy than CO2 does. Methane does break down more quickly than CO2, so it does not remain in the environment for as long.

The leak in Powhatan began on Feb. 15, 2018, when XTO Energy, an Exxon Mobil subsidiary, was in the completion phase of the fourth well on that pad after it had been drilled and fracked. An explosion occurred, and natural gas and brine poured out of the well producing intense flames for several hours. Once the fire was under control, methane that was not burning continued to be released from the well for about three weeks.

As a result of the incident, about 100 people from more than 30 homes within a 1-mile radius of the site were evacuated. XTO paid to lodge all of those people in area hotels, with some permitted to return home five days later and before the well was capped. Four households within a half-mile of the pad remained off limits until the process was completed. After their homes were cleaned by professionals, the last of the evacuees were permitted to return around March 10.

A preliminary report from the U.S. Environmental Protection Agency released at about that same time estimated the well had leaked about 100 million cubic feet of methane per day during the 19 days before it was brought under control..

Drew Michanowicz, a research fellow at Harvard’s T.H. Chan School of Public Health, reacted to that report with alarm, since he believes methane is 84 times more potent at trapping heat in the atmosphere when compared to carbon dioxide, or CO2. Michanowicz compared the Belmont County blowout to two others: In December 2014, a well blowout near Sardis resulted in methane spout into the atmosphere for 10 straight days. One year later, in December 2015, another significant blowout took place in Aliso Canyon, Calif., near Los Angeles.

“The rate at Aliso Canyon was about 48 million cubic feet per day,” Michanowicz said. “If the numbers are right, this was about twice as big as that.”

XTO spokeswoman Karen Matusic said it was difficult at the time to determine how much methane had been released and questioned the numbers in the EPA report. She noted that federal regulators had not been part of the “incident command” since Feb. 21.

In response to the report released this week, Julie L. King, Media Relations Advisor, Public & Government Affairs for Exxon Mobil Corp., said the company is working with scientists to learn more about the data.

“We deeply regret the incident occurred, and have instituted systematic well design and monitoring procedures to prevent it from recurring,” King said in an email. “We are eager to learn more. Our scientists are reviewing the study and the assumptions made. ExxonMobil continues to work with government laboratories, universities and others to identify the most cost effective and best performing technology, including satellites, that can be adopted by all producers to detect, repair and accurately measure methane.”

The report estimates that the damaged well leaked methane at a rate of 80 tons an hour for nearly 20 days. That amounts to more methane than is released by the entire countries of France, Norway and the Netherlands in a typical year.

Exxon Mobil disputes those findings, however. King said the company’s findings suggest it released about 30 tons per hours over the course of the incident. King also pointed out that the technology used in the study is new.

“No volumes are confirmed,” she added.

No injuries resulted from the explosion or fire, and XTO donated $25,000 to the Belmont County Emergency Management Agency in the wake of the lengthy incident. A year later, Brian Teller, operations manager for XTO’s Appalachia District, and Matusic told Belmont County commissioners the well pad had returned to production and the company had developed a more robust casing monitor program.

“It’s all automated. It continually monitors pressure on our well heads,” he said in 2019. “We’ll make sure we have dual barrier systems. … This is a 24-hour, seven-day-a-week system and people are on-call at all times to take care of the problems.”